State Rep. Gary Howell introduced legislation clarifying the legal definition of a military veteran, part of a multi-bill package that will make it easier for veterans to receive benefits they earned while serving their country. 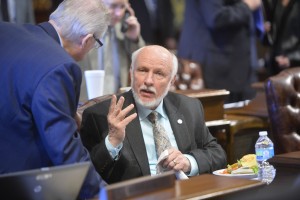 “There are many references to veterans in Michigan’s laws, and not all of the definitions align with one another or with federal laws,” Rep. Howell said. “This bill and others match Michigan’s definition of a veteran with the federal definition, which streamlines the ability of those who served to receive the benefits to which they are entitled.”

The bipartisan package includes HBs 5332 through 5348 and 5548 through 5551. The bills now go to the full House for consideration.

Rep. Lynn Afendoulis today supported a plan aimed at preserving local control and parental involvement in decision-making while helping Michigan students get back to school safely. “There’s absolutely nothing more important than the safety of our children – and this plan acknowledges what’s safe in one community might not be safe in another during the […]

State Rep. Lynn Afendoulis of Grand Rapids Township has scheduled a local office hour to meet with residents of the 73rd District. “I love meeting with residents from West Michigan,” Rep. Afendoulis said. “I invite all to attend to discuss my legislative priorities for 2020.” The office hour will be held on Friday, Jan. 17 […]

State Rep. Pamela Afendoulis, chair of the House Education Committee, today announced the governor has signed the Legislature’s bipartisan agreement to get K-12 students safely back to school this fall. The plan, originally introduced by Afendoulis in June, will allow school districts to determine the best course of action for their students, be it online, […]